Sonic & Sega All-Stars Racing is a upcoming racing game which sets several characters from the Sonic the Hedgehog game series against other Sega characters. It's development was announced May 28, 2009. It is in development for five systems, Xbox 360, PlayStation 3, Wii, Nintendo DS, and PC. The game is being scored by Richard Jacques, who is well known for his soundtrack in Sonic R and the Saturn version of Sonic 3D Blast.

It features multiple vehicles similar to Diddy Kong Racing, but each character has a custom vehicle. Vehicles include planes, motorbikes, and cars. Each character has an All-Star move which can hit other racers and will slow them down while providing an oportunity to gain a higher position in the race. Power-ups and Weapons can be picked up around the track. Players will be able to play with up to four players in split-screen or up to eight players online.

The game plays out like a kart racing game, with characters collecting power-ups to boost their speed or hamper their opponents. Like Sumo's previous Sega game, Sega Superstars Tennis, each character has a 'Star Move' unique to them, such as Sonic transforming into Super Sonic, that they can use against their opponents. The game will have multiplayer options for up to four players on split-screen and eight players online.[1]

Characters drive vehicles that relate to the character. Courses that appear in the game are slated to be references to various Sonic and SEGA titles. 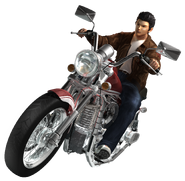 Ryo Hazuki
Add a photo to this gallery

Sonic in his blue convertable

Amigo in his Car de Amigo

Ryo Hazuki in his Motor Bike

Ryo Hazuki in his Forklift

Add a photo to this gallery

Retrieved from "https://sonicfamily.fandom.com/wiki/Sonic_%26_SEGA_All-Stars_Racing?oldid=5477"
Community content is available under CC-BY-SA unless otherwise noted.